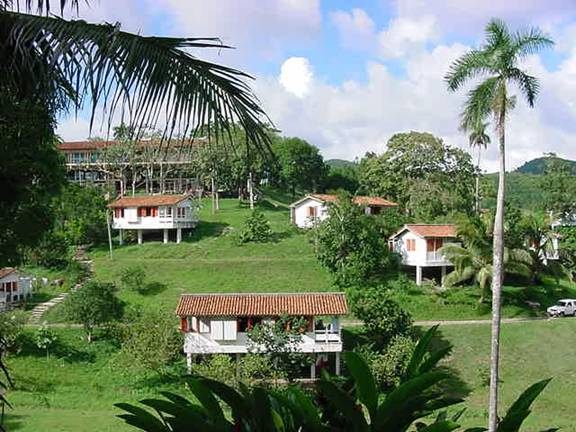 Many of you have heard me talk about Las Terrazas, have written things I wrote about it, or gone there with me. (For those who have missed this, see copy of old letter below, along with a photo of the village and one of me enjoying the waterfall). Now, according to my friend Maria Carla, things are getting even better, if that's possible. Because Las Terrazas is in the middle of a biosphere reserve, they have been VERY careful about any expansion, to make sure it is consistent with the original goals of preserving and restoring forests and nature areas. So news of any kind of expansion is pretty special.

[...] they doubled the space on el río San Juan, to the left of the bridge there is now a big cascade with a natural 1.5 meter-deep pool and cafeteria; Tito, remember him from el Jardín Botaníco's first vegetarian restaurant?, has opened a similar one right next to el taller de sirografía [the silkscreen workshop], AND the architect is enlarging the hotel, but not in the traditional way: he is slowly building "an extra special room" in four of the local residents' apartments in Las Terrazas (the first one to be chosen was--of course--Margarito, the first mayor [one of the "village elders" --part of the first group to move into Las Terrazas in the early 80s-kw]): I visited this first room that has [growing in it], among other things, a mango tree Margarito planted when he moved there, that comes out right next to the shower, crosses half the room, goes out the roof and is again visible from the window looking toward the hills; the door to the bathroom was done by[famous Cuban artist who lives in Las Terrazas] Duporté in stained glass, and one of the decorative elements has been painted in a 6-inch strip running all around the room at hip length more or less. There is a new taller [crafts shop] where they make bamboo furniture now used in these rooms and  of course giving young people a place to work....

Anyway, those who have been to Las Terrazas may want to visit it again. Those who have never been there should include it in their next trip. It is just over the Habana-Pinar border, before you get to Soroa...

One of the best places I’ve been for environmentally-conscious tourism is the community of Las Terrazas, in . The more I learn about it, the better it gets. It is far and away the best and most developed ecotourism project that has.  It also has a number of key aspects that could well be unique in the world of ecotourism. The community came together to develop an ecological project 27 years ago --2 years before the first Earth Day, to put it in historic perspective. Long before anyone was talking about “ecotourism”. So there’s no doubt that ecology is the first priority of this particular ecotourism.

I should add a little about Las Terrazas community itself, because it represents the essence of what the Cuban Revolution was all about in 1959, and what it still is to many people, especially in the rural areas. In the 1960s a main objective of Fidel Castro and other revolutionary leaders was to see to it that the benefits of the  revolution reached the most remote corners of the country, where the quality of life had changed little for centuries, and people were just eking out a bare living—often unaware of what was going on in the world outside.

The idea was to convince these small peasant farmers (campesinos), who usually lived in dirt-floor, thatched-roof “bohios” with no electricity, plumbing, etc, and no schools or medical services anywhere near them, to move closer together, to form small villages or farm coops, so that all these services could be brought in. (That was harder than it might sound, since the first Agrarian Reform instituted by the Revolution had just given the campesinos title to the land they worked on, and it wasn’t easy to convince them that they would be better off leaving it or pooling it.)

At the same time, provincial leaders were asked to pinpoint what the main problems were in their areas (remembering that was and is primarily an agricultural country, the most frequent were lack of water for irrigation, deforestation and soil erosion, etc.)

In the Sierra del Rosario area of , these two factors came together to lead to the adoption of the terrace plan.

There had been major deforestation in the 19th century by the French colonial coffee plantation owners (who sought refuge in after the Haitian Revolution), leading to wholesale destruction of the ecosystem, degradation of the land, and resulting poverty for the campesinos.

To turn this around, they proposed terracing the mountainsides (the Sierra del Rosario is mainly low foothills, not steep rocky mountains) and engaging in major reforestation efforts along these terraces. That in turn would help stop the erosion and restore the ecosystem.

Then, there was a need for housing both for the campesino families whose homes and land were in the areas to be reforested, and for the families of the workers who came in from other areas to help build the terraces and—along with the local residents—take part in the reforestation program.

Thus, “Las Terrazas” came about—now a community of nearly 1000 residents in a picturesque village winding along the terraces overlooking a lake created by the damming of the San Juan River.  Their primary work was, and is, reforestation. But now, with economic hard times hitting the country, making the costly reforestation program difficult to carry out on the same massive scale as before, an ecotourism resort has been carefully introduced to provide additional employment and income for the village without negatively affecting the ecological priorities of the area.

Everyone in the world of ecotourism talks about the objective of establishing positive relations between the eco-resort and the local community, involving the community in planning and assessment, and support of the local economy, but it is almost never accomplished.

Here the interaction is total. The community was consulted and educated beforehand and approved the project. The community is ALREADY benefitting (even before UNECA, the Cuban construction enterprise that built the place, is paid back its investment) in numerous ways, not least of which is that it gets 40% of Moka’s profits and an additional 10% goes to health care in Las Terrazas.

The Las Terrazas Tourism Complex, which includes Moka, is Las Terrazasnow the second biggest employer in Las Terrazas (the forestry plan is still number one). Almost ALL of Moka’s workers live in Las Terrazas.  The hotel provides additional food, medicine, and other supplies for the village. Visitors are often moved to make donations to the  school, childcare center, health clinic or ecology center.

A number of tourist-oriented home enterprises have sprung up—you can get typical Cuban food prepared in Mercedes’ kitchen, or sweet black Cuban coffee brewed at Maria’s place; local craftsmen have set up silk screen, wood-carving, ceramics and recycled paper workshops. The income from sales are divided 40% to the individual artists and 60% to the community

Best of all, everything Moka is providing is going to a community whose very existence came about through an ecological project of reforestation that is still going on today, and that will continue to the extent that the tourism complex is able to keep the community going. The terracing of the mountains and planting of native species that had been destroyed in the area not only has brought back the trees, but by halting the erosion, has also brought back most of the original flora and fauna that had been driven out of the area by last century’s deforestation. All of this is overseen by the Academy of Sciences Ecology Research Station which monitors the Biosphere Reserve that Las Terrazas is located in.

It is one of the only ecotourism projects I’ve seen where ECO (in the sense of both people and nature) really does come first. Las Terrazas provides a model in which women and men are as

important as the trees they plant and nurture, where each serves the other. As such, it is one that people around the globe could learn from. 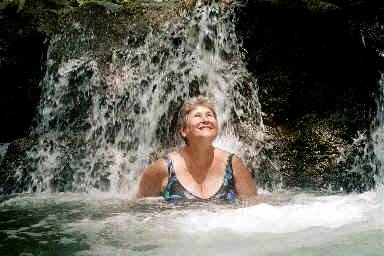