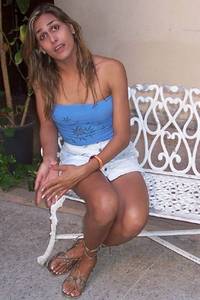 Wendy is waiting for an operation to take up her female identity in full.
PHOTO Gerardo Arreola

Havana, January 9th. Wendy suffered the harassment of her schoolmates in grade school and her father’s lack of understanding. She had difficulties to complete junior high and dropped out. She spent years in seclusion and only last March had her first job. Now she feels fine and with “great self-esteem”.

At 31 she is finally living with the feminine identity she has chosen, although biologically she is a man. She is one of the 25 Cuban diagnosed transsexuals waiting for sex change operations to be performed in Cuba if the Parliament passes a bill presently under consideration.

Wendy tells La Jornada about her difficult childhood and youth. Since the age of 5 she felt feminine tendencies that were soon confirmed by a psychologist. But she had to dress and act as Alexis, the boy she physically was, the only male of 4 siblings. At 12 she started taking female hormones and her breasts developed. Before graduating from junior high she dropped out and opted for a life in seclusion without witnesses and endured anguish and family rejection. She also learned that some transsexuals only found jobs doing housework or became prostitutes.

The turning point in her life was meeting psychologist Maira Rodríguez, from the Centro Nacional de Educación Sexual (Cenesex). After two years of consultations, examinations and behavior follow-ups, the specialist confirmed the diagnosis: transsexual.

With the diagnosis, Alexis was able in 1997 to change his identity card and become Wendy. She was then 22. She was granted free hormone treatment. The psychologist talked to the family, particularly to the father, and got their support. “She made them understand it was not that I wanted to be that way, but that my psyche was special.”

Wendy explains that hormones help redistribute the body fat to mark feminine features. Breasts and hips develop. Voice, hair and skin become softer. She has been lucky in her relations in contrast with many transsexuals who generally face a dilemma: as they undertake a full feminine identity they need a heterosexual masculine partner, but what they usually find are bisexual or homosexual partners.

“There are cases of transsexuals who have been alone for more than six, eight, ten or fifteen years. They do not want male partners if these are not heterosexual. In the country there are no known lesbian transsexuals, but there could very well be. My present partner is heterosexual. Since he met me he pays no attention to other women. My friends tell me, “Wendy, what have you done to this guy that he no longer looks at the girls in the street?” My former partner has an 11 year old son who used to spend his holidays with us in my place. The boy’s mother never knew anything about me. I was her ex-husband’s woman and that was it. The boy would tell her, ‘Yes, she bathes me and feeds me.’ The relation ended because my partner wanted another child.”

Wendy now feels infinitely better than before, “I have my own house. I support myself and do not depend on any man. I lived in voluntary isolation because I was scared of society, but I finally came out. I learned that respect is earned. If you are vulgar or disrespectful, nobody will respect you. I had a transsexual friend who did not understand these things. Her parents pressed her to marry a woman. She even tried to commit suicide.”

When we talked about the draft resolution authorizing sex change operations for transsexuals, Wendy smiles and claps her hands, “At last! It is time our case moves a little forward. It was a dream for many of us.”

As part of a national strategy, the Cuban Ministry of Public Health has systematized an assistance service to identify gender identity disorders. Cenesex is pushing for transsexuals to be accepted and respected in their work places with the sex identity they have chosen, even if they have not changed their documentation. They have also signed agreements with the Ministry of Education to work jointly against discrimination due to sex orientation in schools or family environments.

Erica, who is still Eric in her identity documents, is presently undergoing diagnosis procedures to confirm whether or not she is transsexual. As Wendy, she had a distressing childhood and adolescence. After graduating from junior high she was able to study gastronomy, but had to dress as a man. During that time she never had a partner and suffered police hostility.

Four years ago she heard about Cenesex and joined their group of sex health promoters. Her family situation has improved. She is 26 and lives with a bisexual partner. “It is a pretty steady relation.” She is not yet certain she is transsexual, but has been a subject in the study for three years. She does not want her photograph taken, “Not without my make up…”

Angy’s (or Angel) case is different. He is a transvestite who only a year ago decided to dress completely as a woman and take up a female identity. When he was nine or ten he realized he liked boys. He had a girl friend only to confirm his sex orientation was not masculine. The story is the same: sneers and mockery from schoolmates, disgust in the family.

He started having male partners at 16 and joined the group of sex health promoters of Cenesex. He entered a training program for unemployed youngsters or dropouts. Upon completion he was accepted in the Social Communication School of the University. Things also changed at home. He now lives with his parents and his heterosexual partner.

Angy has not applied for a trans-sexuality diagnosis, but may do it sometime. “There is nothing male in me. I do not want to hear about manhood. I spend 24 hours a day showing my feminine sexuality. At the beginning the people in the neighborhood shouted dreadful things at me, but they’ve grown used to it and find me normal. Once I was stopped by a policeman in the street and he was shocked to see my identity card was of a man. He asked his partner what to do and he answered, “You can’t do anything to him.” At the University I had to enroll with a male identity, but I handed in my female photographs, because that is how I look. I have no problems there; on the contrary I get a lot of support.”

“I’m fighting for something difficult to attain, for society to accept me. The fact that we cross dress should not deprive us of the right to study and have a career. I’m in a group of stage actors. I used to take male roles, but when I changed my sex identity, the group director asked me to stay with them. She said she would give me female roles. I have played the friend of Marguerite Gautier (in Camille), Camila’s neighbor (in Santa Camila de La Habana Vieja) and Martirio (in The House of Bernarda Alba).”

“I take hormones -- self-prescribed – and have seen changes, although not as many as I want. I would like to have a feminine body. In a way, transvestitism is the first step to trans-sexuality. You dress as a woman because you do not want to dress as a man. You are rejecting manhood. Sometimes men say nice things to me in the street. I like that and I don’t say a word. Once I was queuing at the movies waiting for my partner and two heterosexual guys started flirting with me; they were saying sweet things. They never realized I was a transvestite.