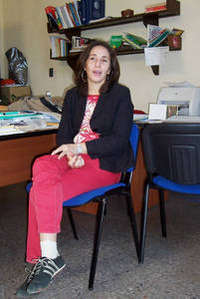 Mariela Castro Espín, Director of the National Center for Sex Education, and main promoter of the bill.
PHOTO Gerardo Arreola

Havana, January 8. The Cuban Parliament is examining a proposal to authorize sex change operations and modification of identity documents of clinically diagnosed transsexuals. This is part of a national policy to recognize the rights of these people to live a full life in the gender they chose.

“The draft was very well received by the representatives in the two commissions examining the project,” said Mariela Castro Espín, Director of the Centro Nacional de Educación Sexual (Cenesex) [National Center for Sex Education] and main promoter of the legislation.

A pedagogue with a Masters Degree in sexology and the daughter of two historical leaders of the Cuban Revolution, Raúl Castro and Vilma Espín, Mariela has been running Cenesex for five years. This last December she presented her proposal to two commissions of the Asamblea Nacional del Poder Popular (ANPP) - National Assembly of People’s Power [Cuban Parliament]: the Commission for Education, Culture, Science, Technology and the Environment, and the Commission for Care of Childhood and Youth and Women Equality.

The project is “under consideration” by the representatives before its presentation as a draft bill, but the support of the commissions is total, indicated Mariela, “They not only accepted the proposal, but asked many questions and made recommendations.”

The next step is to circulate the documentation on the subject among all the members of the ANPP for comprehensive consideration. The result of these consultations will produce a more finely tuned project for presentation to the Plenary.

In essence, the proposal states that as soon as a person is diagnosed with a gender identity disorder – scientific medical term applied to Transexuality – the person’s legal documentation can be changed, from the birth certificate to the passport. This person will also have the right to a sex change operation.

If the bill is passed, it will be the first of its type in the developing world. Cenesex specialists are presently studying existing experiences, mainly European, on the application of such legislation.

Mariela explained that in Cuba attention to transexuality started three decades ago when a person from Matanzas, with the body and identity of a woman but who really felt like a man and wanted to be a man, came to Havana seeking help. This case prompted the creation, in 1979 and by recommendation of Vilma Espín, of a Special Committee coordinated by the Grupo Nacional de Trabajo de Educación Sexual [National Work Group on Sex Education] the forerunner of Cenesex.

According to Mariela, their first result was an agreement with the Ministries of the Interior and of Justice to authorize diagnosed transsexuals to change their identity documents. This was done in three cases.

Later on, a care system that included diagnosis, psychological assistance and even free hormone treatment was put in place.

The first, and so far the only, sex change operation in Cuba was made in 1988. The change was from male to female. It was successful and the patient lives without difficulties. The case was presented to a meeting of experts, but the media coverage was “more sensationalist than scientific”. This brought about rejections, letters of complaint and prejudice.

The authorities decided to stop the operations until the issue could be properly explained to the population, commented Mariela.

In the last decade, clinical and psychological care was provided but with a low profile. “We were unable to convince people of the need to carry out these operations. This reluctance also came from the professionals in the Ministry of Public Health who were not experts on the subject. There is where I feel the strongest resistance, even as we speak.”

Mariela added that in recent years the subject gained supporters. A group of transsexuals joined Cenesex and were trained as sex health promoters in the campaign for the prevention of AIDS. In the Center they have a permanent open debate forum and receive specialized care. The Health System provides them with free hormone treatment.

“We have studied 74 subjects identified as transsexuals, but only 25 have been diagnosed: 23 from male to female and 2 from female to male.

Among the transsexuals “some are well-adjusted, but others find things more difficult. The 25 diagnosed cases are waiting for the chance to have their operation. They are getting old and wish to die with their sex changed.”

At the beginning of 2004 there was a new momentum when Cenesex launched a national strategy: it increased and diversified its professional staff, obtained support from President Fidel Castro and directly contacted ministries and social organizations to discuss, based on entity profile, the subject of transsexuals,

“It seems all this work is now bearing fruit. People are now more receptive. We have also articulated a more persuasive discourse,” comments Mariela. “I see great flexibility, even among official leaders.”

Recently a transsexual male with feminine appearance was able to travel abroad with his passport issued with his female identity. He returned uneventfully with the same passport. Other four had their operations abroad and on their return obtained a change of identity documents. “The Courts of Justice were finally convinced.”

Mariela remembers the repression of homosexuality practiced in Cuba. At the end of the 60’s homosexuals were forcefully interned in collective farms run by the Army, the Unidades Militares de Ayuda a la Producción (UMAP) [Military Units to Aid Production]

The First Congress of Education and Culture (1971) launched a policy of “parameters” which meant that people had to meet specific parameters to have access to certain jobs and public positions. This discriminated against homosexuals. Homosexuality was illegal in the 70’s and homosexual behavior still suffered legal restrictions until the 90’s.

“Many negative experiences led to the realization that prejudice cannot be allowed to dictate action,” says Mariela who explained that criticisms of UMAP and ensuing protests ended the existence of such centers. “Reality made us aware of the big mistake made which affected so many people.”

In contrast to this, she referred to the public policies that since the outset of the 1959 Revolution have been aimed at eradicating the discrimination of women, of incapacitated or of blacks.

“How come we do not do the same with the diverse sexual expressions? This Revolution cannot afford such an inconsistency.”

Mariela added that in spite of the changes there is still a need for legislation and detailed decisions to avoid discrimination. “For instance, there may be transsexuals who have a job and are not rejected, because the law protects them, even if they go cross dressed. But the administrators always find a way to get rid of them.”

On the subject of the cases of police hostility against transsexuals and transvestites that took place two years ago, Mariela explained they were caused by complaints from the neighbors in an area of Vedado who “felt harassed” by homosexuals who practiced street soliciting.

The official reaction was excessive and “they put everyone into the same bag”. By arresting transsexuals and transvestites only for their physical appearance, some police officers acted “on ignorance and prejudice.”

“This attitude was not in keeping with the policy or the law, because these do not penalize a person for cross-dressing,” she commented.

Cenesex got involved and opened a communication channel with the Police and the Ministry of the Interior. They have made agreements to provide education on the subject to the police forces deployed in the municipality of Plaza de la Revolución, the commercial and tourist center of Havana, the most “sensitive” area.

Police officers “have been told they are not to hassle these companeros. We have been given procedural guidelines so these people know how to defend themselves in case of police transgression of the regulations.”